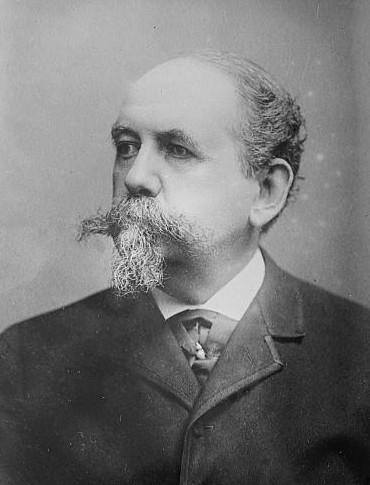 If you’re really into the Gilded Age or historical etiquette, you’ve probably heard of The Four Hundred. The Four Hundred represented New York’s social elite in the late 19th century and comes from the number of people that could fit in Mrs. William Backhouse Astor, Jr.’s (neé Caroline Webster Schemerhorn) ballroom. It turns out that, technically, the 400 person ballroom was actually at their Newport, RI “summer cottage.” I guess even back then space was tight in NYC. THE Mrs. Astor, as she was known, was the social gatekeeper for New York society. The Astors and their ilk were the cream of “Old New York” and were adamant about keeping all the “New Money” riffraff out. Enter Ward McAllister.

McAlister was born into a socially prominent family in Savannah, GA. After making some money as a lawyer in the California goldrush, he travelled around Europe picking up European manners and becoming acquainted with the customs of the nobility. Returning to the US, he married Sarah Taintor Gibbons and joined New York society. Distantly related, Mrs. Astor became his patroness and he set out to become the leader of society.

At the time, the Old Money of New York was the descendants of the original Dutch colonists or Knickerbockers and the New Money were people like the Vanderbilts who had earned (as opposed to inherited) their money recently in industries such as railroads. McAllister called the cream of the Old Money society The Tong (a play on the British expression, the Ton?) He also apparently called the Old Money the “Nobs” and the New Money “The Swells.” To be considered part of the four hundred, you had to have three generations of wealthy ancestors who had not worked in the trades.

Early on, he bought a house in Newport, RI and by convincing his society friends to also build summer homes there, made it one of the grandest summer resorts in the country.

As a founder of The Patriarchs, a group of fifty wealthy men who hosted many important events during the social season, he had great control over what social events were and who was invited to them. He also gave advice to society hostesses about food, wine, clothes, dancing, etiquette, and entertainments. Importantly, he saw his role as a social arbiter as an important job. He never dined at his club like so many men of his era so that he would always be available to dine with ladies. He was also fastidious about paying and returning social calls, to keep this web that held society up going.

He was also a famous host, giving small dinners in New York and hosting extremely popular picnics in Newport each summer.

In 1890, McAllister wrote a memoir, Society As I Have Found It, which while outlining his life and containing great detail on his methods of entertaining, also contained plenty of information about those high society people he was friends with. They were not pleased about this as they valued their privacy and banished him from society. Though, when he died in 1895, his funeral was attended by many of the society people who had been his friends.