I was having dinner with a friend at a new Welsh restaurant in Brooklyn when I started thinking about how one of the anxieties people have about restaurants is pronouncing what they are ordering. Right up there with knowing which fork to use, I think a lot of people get the impression from the media that if you can’t pronounce Coq au Vin correctly, your dining companions will be absolutely mortified and you will feel like an imposter.

The truth is that no one cares if you mispronounce anything. However, in most instances, there is an easy trick you can use. Just call it by it’s name in English or pared down to the basics. In my case at the Welsh restaurant, I wanted to order the ffagodau and haha, I don’t speak Welsh and I am not even going to TRY with that one. What I did do, was ask for the meatballs, which is what the dish was. This works pretty well for menus that are small where there is say a dish each of salmon, tilapia, steak, chicken, and lamb. Just name the meat. Or the preparation or sauce.

If worse comes to worse, just mispronounce with abandon and laugh it off! 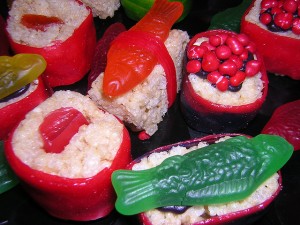 Candy sushi is my kind of sushi [Via]

I don’t even like sushi that much, so I might not be the best person for this, but when has that ever stopped me? Where we lived in California growing up, there was a sushi place that had a bar with a little channel of water and the sushi came by on little boats. It was great and I don’t know why more places don’t do it.

Luckily, most Americans will never go to Japan so we can enjoy sushi like the heathens that we are in nice, moderately priced Japanese restaurants. Or even better, via Seamless in the privacy of our own homes. However, if you want to show off your good manners or start planning a trip to see that guy in Jiro Dreams of Sushi, here are some tips: 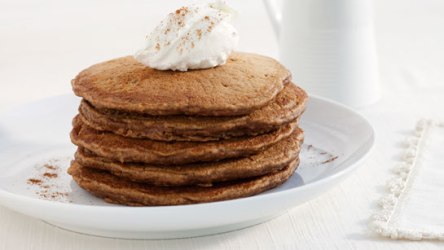 Some pancakes are probably worth it [Via Wikimedia Commons]

By now, you all have probably heard about the incident at a diner in Portland, Maine where the diner owner screamed at a crying child. Obviously, we have our opinions about it.

Jaya: I forget, have we done something about children in restaurants? Because this is blowing up: http://www.buzzfeed.com/ryanhatesthis/people-are-congratulating-this-diner-owner-after-she-screame#.gd0RBBab31

Maybe we could pull out the etiquette lessons on both sides here?

Jaya: And I feel like it just makes both sides worse. It makes parents more likely to not react well to criticism, and it makes others less friendly and understanding of weary parents and cranky kids.

Victoria: Yeah, parents definitely need to try to deal with their kids crying. Like, take them outside for a bit or wrap everything up and leave. And for sure a restaurant can ask them, NICELY, to leave if they are disturbing other patrons. But the yelling and swearing is incredibly inappropriate.

Jaya: And buried in the owner’s rant was a good suggestion–have snacks! If your kid is hungry and their food isn’t ready, have some apple slices or whatever.

Victoria: Yeah! Snacks are good. One of MY favorite diners always has a long line and they give snacks to everyone!

Jaya: And yes, if you run the restaurant, ask if the parents can take the child outside or maybe offer the kid a snack yourself. Though I can immediately see parents being like “don’t you think we’re trying?” or “don’t tell me what to do with my kids” because everyone is testy.

Victoria: And like, someplace like a diner- I think you have more leeway- like the kid can cry for a bit and its not that bad. But the finer dining the place is, I think the less time you have to quiet the kid. I was having dinner at Commanders Palace in New Orleans and there was a family with a small child sitting nearby that would not stop crying and the family did nothing. And everyone was FURIOUS. Rightfully so, I think, as it is very much a once-in-a-lifetime type of restaurant for many people.

Jaya: Yes, I think if you see a parent clearly trying to do something and the child just won’t stop, it’s unfortunate but certainly not as bad as parents ignoring the situation. Like at home I am all about being like “fine, cry yourself out, you’re not moving until you eat your peas” but in public there are other people to consider.

Victoria: Yeah, exactly. I am always a million times more sympathetic when I see the parents trying. Or when the restaurant makes special arrangements to put them in an area where the crying is less likely to be a problem- I was at another upscale restaurant that had a smaller dining area in the back and they had put a family with a kid there and it worked great. Of course, that’s not always going to be possible. But I think the more that people are starting to dine out with their children (which i think is great! They learn manners best by practicing), restaurants should put some thought in how to deal with it. Parents should also make an effort to eat at the dinner table with their children at home and enforce good manners as much as possible. Then, kids will be used to sitting still and eating their food and it won’t be such a novel experience at a restaurant.

Jaya: Absolutely. Though then we get into the “should people bring kids to restaurants/bars” thing, which I have mixed feelings about. I think on one hand it’s great to start kids young in knowing how to be around other people and not be the center of attention and manners and whatnot. But I see a lot of parents being like “I’m exhausted and I wanna be out so you’re just gonna have to deal with my kid no matter what they do.” Which, sorry to be so blunt, but you’re the one who had the kid. This is the sacrifice you make.

Victoria: I mean, it should definitely be something you do AFTER you’ve instilled good manners at home and find that they generally act pretty well. And be prepared to leave if they act up. I mean, my parents took me to a fancy restaurant at a winery when I was like, 1, and it was fine and I was well behaved.

Jaya: Haha, of course you were.

Victoria: But they pretty much knew that I was easy going and didn’t act up.

Jaya: I also think the type of restaurant matters. Big open beer gardens, brunch at backyard patios, diners, basically anywhere big and casual is probably better suited for kids. So if you want to go somewhere fancier or intimate or at night, not that you can’t, but it’s going to make it a lot harder.

Victoria : Oh yeah, for sure. And you should work up to that. Start with breakfast at a diner that is usually fast (omg nothing trendy with a 2 hour waitttttt!!) And then lunch somewhere and then you can work up to dinner when you know you can trust that your kid can behave.

Jaya: Hahaha in general avoid 2 hour waits for anything omg.

Victoria: Seriously. I get very cranky waiting 2 hours for brunch so I can’t even imagine how it feels for a toddler.

Jaya: Also it’s brunch! Like, it’s fun, but you can get eggs LITERALLY ANYWHERE. Your trendy Eggs Benedict is not THAT much better than an Eggs Benedict I can get anywhere without a wait. Anyway yeah, I feel like if the parents are clearly trying to calm their kid down we should all be more sympathetic. But if your kid is having a meltdown and nothing helps, part of being a parent is you gotta take care of them before you can have your pancakes.

Victoria: Yes. That is what it comes down to. And if you own a business, you can gently ask people to leave (volunteer to wrap things up for them, rush their check!), but don’t yell and swear at people the first thing! Like, that’s just ridiculous.

Jaya: Yeah! Avoid that if at all possible, though if the parents are being insufferable asshats about it you can escalate as needed.

Victoria: For sure. The key is “escalate as needed”