I can’t be the only one who finds these gifts puzzling. What about the tenth anniversary suggests tin? Why should I be supporting the ivory trade for the 14th? What about paper seems romantic? Where the hell did these come from?

Most sources suggest that giving certain gifts for certain anniversaries revolved around the luck-bringing properties of those gifts. A few sources also point to the trend beginning in Central Europe. “Among the medieval Germans it was customary for friends to present a wife with a wreath of silver when she had lived with her husband twenty-five years. The silver symbolized the harmony that was assumed to be necessary to make so many years of matrimony possible. On the fiftieth anniversary of a wedding the wife was presented with a wreath of gold,” according to one source. The other anniversaries probably trickled down from there, and by the 20th century less valuable and durable materials–crystal, tin, wood–represented fewer years. There are also theories about what each one represents, from “paper is a blank page” to “iron is a symbol of a sturdy foundation” blah blah blah.

Many older etiquette guides mention these gifts not as ones the couple should exchange between themselves, but gifts guests should give the special couple on “anniversary weddings,” or celebrations on their anniversary. Invitations to the first anniversary, the “paper wedding,” “should be issued on gray paper, representing thin cardboard,” according to The Ladies’ and Gentlemen’s Etiquette of 1877. The tin anniversary was supposed to be printed on oxidized tin cards, which is some hipster bullshit. The author also notes, “it is not unusual to have the marriage ceremony repeated at these anniversary weddings,” though notes a repeat ceremony is usually reserved for the silver or gold anniversaries.

Golden anniversaries could be somber occasions, according to The Home Manual of 1889, “too often fraught with sorrowful memories of the dear ones who have passed into the shadow-land.” The silver one is much more fun, with the couple “still in life’s prime instead of being near the end of their earthly pilgrimage.” You could also celebrate the twentieth anniversary as the linen wedding, but not if you’re Scottish, as they “have a superstition that one or the other will die within the year if any allusion to it is made.” Or maybe it’s unlucky for everyone.

According to Social Life: Or, The Manners and Customs of Polite Society, there is a particular protocol that must be observed when celebrating a golden anniversary. Anniversary poems are read (whatever those are), telegrams from those who couldn’t attend are announced, and there is a recitation of Longfellow’s “The Hanging of the Crane.” It is noted, however, that “good taste” would keep anyone from repeating the original wedding ceremony, so Social Life and The Ladies’ and Gentlemen’s Etiquette can duke it out over that.

Even though having specific silver embossed invitations and gifting conventions for an anniversary seems overly complicated, there’s something about it I like. It’s elaborate, but contained. Keep the celebrations to the milestones. I’m not saying the couple can’t choose to celebrate every anniversary themselves–they should! Get gussied up and go out! Just that families don’t need to be throwing parties every year. Can you imagine if, in addition to the seven weddings you’re invited to this year, you had to go to anniversary parties of all the weddings you were at last year? I’d die. 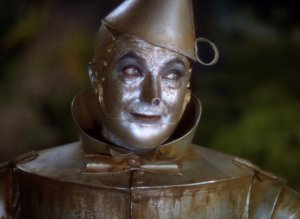 This is the only thing made of tin with which I am familiar.

Have an anniversary coming up and don’t know what to get your partner? These are the traditional anniversary gifts for each milestone year:

10th: tin (is anything even made out of tin anymore?)

Now, Emily Post says that guests attending an anniversary party are supposed to bring the appropriate category of gift. However, I think celebrating anniversaries that are not your own is SUPER WEIRD and except for a 50th anniversary, they should not be public things. My grandparents had a MARVELOUS 50th anniversary party and as far as I know, no one brought gifts (my cousins and I had to wear color-coded teeshirts to make it clear which of my grandparent’s five kids we belonged to, which, at 12, was gift enough.)