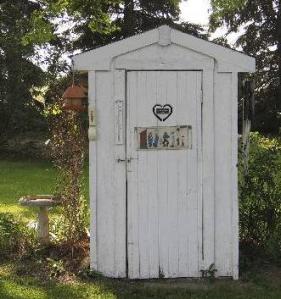 It could be worse! [Via Wikimedia Commons]

We recently saw a discussion on Twitter about whether, given the terrible drought in California, is it okay to follow the “if it’s yellow, let it mellow” policy in public restrooms as well as at home. We were asked to weigh in, so here is our take:
Victoria: I’ve been thinking about it all week and I really do not know
Jaya:  I think it’s responsible citizenship. It may seem gross, but that’s just because of our hyper-vigilant ideas about cleanliness.
Victoria:  That’s the way I was leaning. Like, it really does not bother me to pee on someone elses pee in a restroom.
Jaya:  However, I would like to point out that solutions cannot come on the individual level like this. We need structural change. taking shorter showers is not going to make the dent we need.
Victoria: Yeah, for sure. But every bit counts as well, not to mention it helps set everyones mindset to conservation rather than, “well it doesn’t matter for something so small”
Jaya:  Oh absolutely. But yeah there is this trend of like “if everyone just doesn’t eat almonds and washes their hair every other day then it’ll be solved” and like, no.
Victoria:  Oh! Though, I think if you notice that its starting to smell, you should probably flush after you go.
Jaya:  Yes, definitely. And yeah, this is sort of in between individual and structural. like, the government is encouraging people to do this. So you should do it and maybe quit being so squeamish. I mean people drink urine, it’s not the worst thing to ever happen to you.
Victoria: Although, I do wonder about toilet paper clogs- like if its the 5th “let it mellow” happening then, thats a lot of TP in the bowl that now has to get down the pipe.
Jaya:  That’s a good point. If you see it’s getting to that point then flush.
Victoria:  Definitely. Too smelly, too full of TP, flush it down.
Jaya:  I just feel like this isn’t rocket science? If it looks like it really needs a flush, do it, and if you can avoid it, avoid it.
Victoria:  Hahahaha yeah, exactly. Plus! It can make you less annoyed at people! Like in non-drought conditions, you see an unflushed bowl and you are like, “ugh, what a jerk.” When its a drought, its like, “what a good citizen!”
Jaya:  yeah!

Did everybody in the 1920s have an etiquette book? They seem to have been everywhere. According to one promotion in the New York Times, you didn’t even have to pay! Just send the ad to Doubleday and receive a free copy of “Etiquette Problems in Pictures,” a book showing “mistakes that are constantly being made in public, in the dining-room, on the dance floor, at the theater.” Think you’re too good for an etiquette guide? Well, they’ve included a quiz to see just how much you know. See how many you can answer: 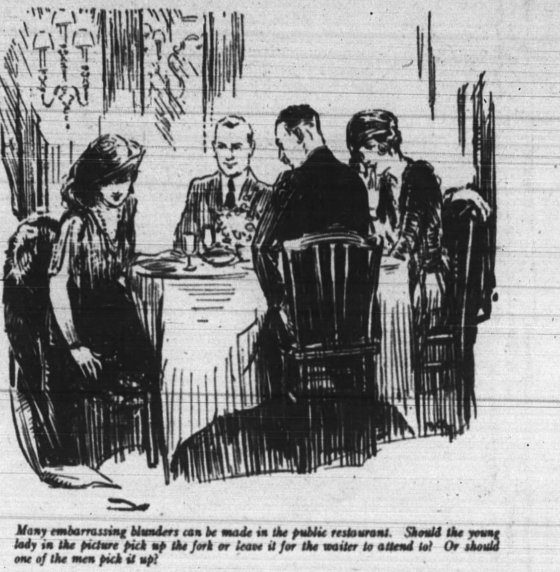 Via the New York Times

I think I know the answer to one of these! Man, I would not have survived society in the 1920s. 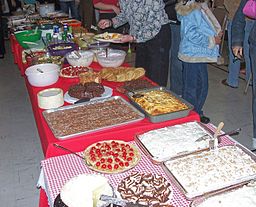 Church ladies know how to potluck! [Via Wikimedia Commons

If you are throwing a potluck, you are not “hosting,” you are “organizing” as hosting implies that you are providing everything for a party.

Potlucks are not appropriate for wedding receptions as wedding receptions are supposed to serve as a thank you to the guests for doing the important duty of attending the wedding. However, you can get away with it in certain circumstances: having a VERY small wedding of mostly locals who are enthusiastic about the idea. It’s also a lovely idea to throw a potluck FOR a couple who otherwise wouldn’t have a reception.

For less formal gatherings, a potluck can be a great way for a bunch of people to get together without it being a significant cost for one person/family.

However, if you want to plan a potluck, make it clear when issuing the invitation. Do not pull a bait and switch:

“Hey, do you want to come over for dinner on Saturday?”

“Sure! That sounds so fun!”

“Great! Come at seven and bring a salad to feed 8!”

That is not okay. You must say something like, “Hey everyone, it’s been a while since we’ve seen each other and it would be really fun to hang out and play board games and have dinner on Saturday. We can have it at my place if everyone will bring a dish. I will grill burgers and hot dogs, so bring some sides, desserts, and drinks that go with them!”

And if you are the one with the great idea to host a potluck, please actually make some effort towards planning. In addition to food, you will need serving utensils, plates, cups, silverware, etc. You want to also help guide the party so you don’t all end up bringing potato salad. Making a party potluck doesn’t mean it doesn’t take any work. That being said, don’t be a potluck dictator! Letting people know what categories of items are needed is great, telling people that they must bring a chocolate cake with chocolate frosting is not. Also make sure you have a convenient area to set up the food in a central location so everyone has a chance to access it.

For the potluck attendee, of course it goes without saying that it is beyond rude to show up at a potluck empty-handed. It is also rude to bring significantly less than anyone else. Don’t show up with one $2 2-liter of soda when everyone else is bringing their famous lasagnas and layer cakes! It’s fine if you can’t cook, just say that you will bring all the paper goods or 5 2-liters of soda- something comparable!

Another good rule is to bring at least enough to feed the number of people you are bringing with you plus a few more (ie a couple with two kids should bring way more food than a single person!)

If you have significant and difficult dietary needs, make sure you bring something substantial that you know you will be able to eat, or just decide that potlucks are not your bag and decline the invitation. Don’t get there and complain there is nothing you can eat.

Never criticize a dish someone else brings. If you don’t like it, simply don’t eat it.

Your dish should be ready to serve when you arrive- you won’t be able to guarantee that there will be fridge or oven space (unless you clear it with the host in advance.)

When serving yourself, be sure to take small enough amounts that there will be plenty of food for the people behind you. It sucks to be last in line and have nothing left to eat besides some melting jello salad.

Don’t go back for seconds until everyone has gotten firsts. 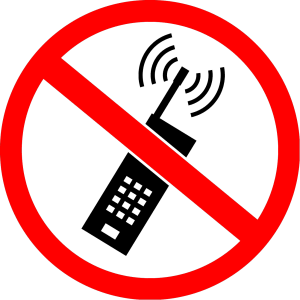 You shouldn’t be using cell phones in theaters anyway. [Via Wikimedia Commons

You might have heard about the recent incident where a man jumped up on a Broadway stage to plug his cell phone into a (fake) outlet.  In case you weren’t aware, this is very bad behavior.

Apparently this outstanding piece of humanity held a press conference about the debacle and said:

“I don’t go to plays very much, and I didn’t realize that the stage is considered off limits. I’ve learned a lot about the theater in the past few days—theater people are really passionate and have been very willing to educate me. I can assure you that I won’t be setting foot on a stage ever again, unless I decide to become an actor.”

Basically, just because an outlet is publically visible does not mean that it is there for your free use! Electricity does cost money after all, not to mention the weirdness of someone just hanging out against a wall in a retail store with their phone plugged into an outlet! If you must charge your phone, please find a coffee shop or other acceptable place and BUY some coffee or a nice scone for the privilege. Or buy yourself a battery powered charger or live without your phone for five seconds. I mean, does this really need to be said? Apparently.

Embed from Getty Images
We recently saw a question on Twitter about whether you can wear white to a same-sex wedding where there is not going to be a bride in a wedding dress and decided to take it upon ourselves to answer it.

Jaya: I honestly have no idea.

Victoria: Oh woooooow, I would err on the side of NOT just out of respect for tradition and also like, while most people SHOULD be aware that they are at a wedding with two grooms, but if they are not for some reason, you don’t want them to mistake you for the bride (also with vendors, the general workers might just not know what’s going on). And yeah, one or both of the grooms might wear it. ALSO, like, there are approximately one million other colors and patterns that are NOT WHITE so I REALLY do not understand why people are constantly asking about wearing white to a wedding. Just take away all thoughts and considerations and don’t do it.

Jaya: You’re right, there are SO MANY OPTIONS. Like, just don’t wear a white dress for one day of your life.

Victoria: We aren’t the only ones to think this. A few years ago, Jezebel asked Steven Petrow, author of Steven Petrow’s Complete Gay & Lesbian Manners and The New Gay Wedding and he said “No doubt about it, they’re going to draw attention to themselves. And that’s the problem. That’s the faux pas.” Because everyone knows the rule about wearing white and will be talking about how you broke it instead of focusing on the couple.

Jaya: And it may sound like a stupid, antiquated rule, and you may be tempted to break it just because we should all be modern and understand that nobody is drawing attention from the couple, but you know…just don’t. At worst, someone is going to call you out on it and get really upset, but even at best there will probably be a couple people who just think you’re weird.