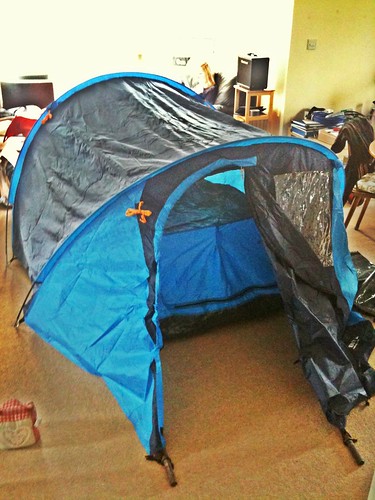 Hey guys!
Exciting to email you, I’m a big fan. I’m also a college student, and typically at my school, students move out of dorms into apartments for junior year (which I’m in). I’m in a 2 bedroom apartment with one other girl; the common space consists of a connected kitchen and living room. My roommate has never lived in an apartment before and doesn’t seem to have been raised with some of the same instincts for being considerate that I have, so I’ve been having a lot of issues with public space and how considerate that I can expect her to be in it. Some examples of what I mean:
-she moved in a few days earlier than I did, and she neglected to tell me she was going to bring all her tchotchkes (of which there are MANY) and put them everywhere in the kitchen/living room, as well as hanging her art up in all the ideal locations. I hate tchotchkes and feel like the room doesn’t look like it’s mine at all.
-If she’s home, she’s in the living room. She basically only goes to her bedroom to sleep. It makes me feel uncomfortable about being in the living room most of the time… because she’s already there. Always. There. Just dinking around on her laptop (also she doesn’t use headphones and laughs while she read things).
-we have comfortable living room seating for like 2 1/2 (a loveseat and a beanbag chair). When my friends come over, she tends to just stay in the living room (on the beanbag chair) so not only is she just THERE while we talk/whatever, we’re also kinda squished together.
-Also this is a general anyone thing but she leaves the iPhone keyboard typing sound on and it is the WORST. Why do people use that?! Do they need everyone to know that they’re capable of typing?!
Are any of these legit issues to have or am I being unreasonable? Can y’all offer some tips on sharing an apartment?
Sorry this is like Russian-novel length but I feel like I’m going insane and no one knows etiquette like you do.
Yours,
Going insane in my own apartment
Official Etiquette:
Miss Manners has a great question from a grandmother whose granddaughter is living with her (even 70 year olds don’t know how to deal with roommates!) Obviously she advocates discussing boundaries with the person.
Our Take:

Victoria: Ahhhh. Ack, I have been so guilty of some of this in the past, it’s my biggest etiquette sin.

Jaya: Hahahaa omg, I haaaate the iPhone noises. What person does that?

Victoria: Yeah, that’s really bad. I 100% think in a shared space you should do what you can to not have excess noise.

Jaya: I feel like apartments and roommates are like, the ultimate test of the core of etiquette–this idea that you need to be accommodating of other people while still taking care of yourself.

Victoria: Hahah yeah. I actually once really did hog the living room- but I HAD to- for some reason our wireless only worked for me in there and not in my bedroom.

Jaya: Ooh that’s rough, yeah I know that feeling. I mean, I think there are a few things that can be said outright. Asking someone to put on headphones if they’re listening to videos on their laptop is totally normal. Also I think asking about the art. If you have stuff you want to hang up, say that you’d like some space in the living room to do it.

Victoria: Yeah, that one is pretty weird to me, that she would decorate without asking.

Jaya: I guess it depends on how she acts normally. I can’t get a read on if they knew each other before or not, or what kind of personal relationship they have but you can either be like “Hey I have this poster I think would look great above the couch” and hope she gets the hint. Or be more direct and say “I feel like you decorated the living room entirely with your stuff, and I’d like to make it a little more balanced so it can feel like home for both of us.”

Victoria: Yeah that’s all good. And I think you can ask that she spend some time in her bedroom. Be like, I have some friends coming over tonight and I’d like to use the living room. This was my problem in my younger years- I was so used to sharing space with my family, that I genuinely could not see the problem with my just being physically present, even if I was being absolutely silent. And it took, ahem, kind of a long time to understand it.

Jaya: Yes, definitely keep her posted on some plans.

Victoria: And like, really don’t be afraid to just go in there and plop down on the couch and turn on the TV, and if she complains….I guess just be like, “well the TV is in here, so it gets precedence and if you don’t like it you have a room you can sit in.”

Jaya: As weird as it sounds, hiding in your room is only going to teach her that she can sit in the living room all she wants. You sorta have to step to her with this. So side story: My freshman year dorm roommate had been to boarding school before, so she had lived in dorms and I hadn’t. I, however, lived in apartments my whole life, so it’s not like the idea of shared living was new to me. She proceeds to give me this whole lecture on how to live in a dorm, and how I probably don’t know ANYTHING about it, and being really mean and judgmental about it. When all the advice was like “don’t make too much noise if the other person is sleeping” and “don’t bring guys back all the time.” Like, stuff any normal considerate human would know. She was THE WORST ROOMMATE. She took over all the spaces, constantly had people over and wouldn’t hang out elsewhere when I said I had to study or sleep, and generally acted like I wasn’t there. So, obviously not that LW is doing this, but just make sure if you’re coming at it from “I know what apartment living is like and she doesn’t,” that you’re not just trying to make it all your space either. I say this entirely out of past trauma and not because I actually think LW sounds like this.

Victoria: Hahahah yeah. And I understand not wanting to talk to them about it, but you have to or you will just stew.

Jaya: Yes. (Freshman year roommate also refused to talk to me about this stuff when I sat her down and was like “We need to discuss this”…after she gave me a whole lecture on not letting things stew).

Jaya: So what if she brings up a bunch of reasonable points and such, and this roommate just shuts everything down and is like “no my tchotchkes stay everywhere.”

Victoria: Lol…..well then you don’t really have many options- it’s beyond etiquette and you’re dealing with an unreasonable person. If the school offers mediation, try that. If not, move.

Jaya: And break some of the tchotchkes on your way out.

Victoria: Hahah yeah, I mean, the thing with a bad roommate is sometimes the best solution is to just leave. And even if you can’t, it’s just for the one year and then you will have this great story to one-up people with for the rest of your life.