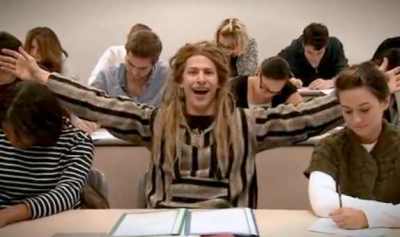 I’m sorry this is your neighbor

Last week, author Jennifer Garam’s XO Jane article, I Don’t Want to Smell Your Pot Smoke and I Don’t Think It Should Be Legalized, was picked up by Time Magazine. Obviously the title is a bit sensational, but I expected to be a bit more sympathetic than your average Millennial. As someone who doesn’t smoke pot, I can relate to a lot of Garam’s complaints: the constant pressure to do it because it’s “cool,” the frustration of being the only not-high person in a room, and most of all the smell. The smell of pot is something that’s always bothered me, and the prospect of legalization and the increase in that smell being acceptable gives me a minor panic attack.

However, the crux of Garam’s complaints is really an issue of etiquette, not of legalization.

Garam illustrates her complaint with her downstairs neighbor, an apparently avid pot smoker.  She explains, “I live in an old building with cracks and crevices so there were a lot of places for the smoke to seep through. It smelled like it was coming up through the radiator, through the crack between the floorboards and the wall at the head of my bed, by the kitchen, and in the closet. Also, I live on the top floor, so the smoke would float up to my apartment and get trapped there with nowhere further to go.” She complained to her landlord (though seemingly not to her neighbor) to middling success, and received no relief until her neighbor moved out.

We’ve discussed both pot smoking etiquette and apartment etiquette here, and this issue lives at that intersection. I’ve lived in apartment buildings my whole life, and I’ve been subject to pot smoking neighbors, but also cigarette and cigar smoking neighbors, and none of these are pleasant.  For two years my pantry (which shared a wall with another apartment) smelled like cigarettes, and when I was a kid my neighbor down the hall smoked so many cigars I swear the lobby was hazy. I’ve never particularly minded cooking smells, but if someone hasn’t taken out their garbage for weeks, believe me the whole building knows. Even if you’re a smoker (of anything), it’s not a stretch to understand that not everybody is okay with, or can handle, the smell of your smoke.

This is all to say that if you live in an apartment building, you have to come to terms with your space not being entirely your own, and that goes both ways. If you’re going to smoke pot, you have to do everything in your power to contain the smell to your own apartment (smoke through a vaporizer, with lots of windows open, or with one of those things with a dryer sheet tied to the end of a paper towel roll). If you are bothered by the smell or smoke from your neighbors, ask them yourself first instead of running through your landlord. Make it clear that their actions are directly affecting you. It’s easy enough to shut the door to our apartments and forget that the outside world exists, and yes I’m all for having sex as loudly as you want, but if you’re going to live in an apartment, you have to remember there are people on the other side of that wall.

Issues like these are good reminders that we are never entirely alone. Whether you lived in a crowded apartment building or in an open field, miles from your neighbor, your actions and decisions affect others. It seems inevitable that pot will be legalized in the US, and despite the issues that will arise (can we talk about how black people bore the brunt of pot arrests and white people are most likely to reap the benefits of legalization?), it will probably be a good thing. We still deal with the issues of alcohol being legal, but you’d be hard pressed to find many advocating for a complete return to prohibition. So no, having an annoying pothead neighbor does not mean pot shouldn’t be legal. I’m sure this woman has had many a pothead neighbor who’ve been able to keep their habits to themselves, and thus she’s never known about it. What it does mean is that we’ll all need to rethink our habits and adjust them accordingly, so that nobody is forcing their hobby on an unsuspecting tenant.