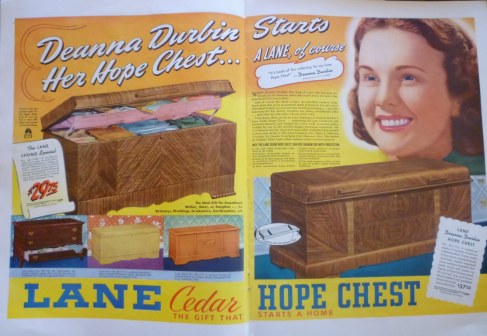 “provide sanctuary for her downy woolens, her dainty, beribboned silks…until that day she starts a home of her own.” [Via]

Ladies! You know how when you were a kid you went to school and stuff, and it sort of sucked, and you spent all day wishing you could maybe not do that? Well, what if instead you spent your youth sewing tablecloths and blankets and clothing for your future husband? Childhood solved!

The Trousseau goes by many names–glory box, hope chest, bottom drawer, dowry–but essentially it was a collection of linens ‘n’ things for the bride and groom’s new home and/or clothing to last the bride the first few years of marriage. And for a long time, the bride was expected to make it all herself, and stow it all away until a groom finally appeared. According to Lillian Eichler’s 1921 Book of Etiquette, “The development is most marked in Roumania. Here we find the tiniest girls, some of them as young as five years, working on bridal finery each one striving to outdo the other in beauty and elaboration of work.” In many cultures female relatives pitched in too, and wealthier families simply had the maids do it.  However, once a suitor did arrive, he “had the privilege of examining the trousseau and deciding whether or not it was complete.” So tough luck if you sucked at sewing. Maybe you could find a job as a chaperone?

The whole reason you needed to do this is because your husband just wanted to come home to some comforts, ok?! Part of any western marriage, especially before the 20th century, was the agreement that the woman was the head of the household, and responsible for all the comforts found there. Lots of men looked forward to marriage as a way to finally have some nice things around the house. The irony was that often men were older and more established, so they could buy things like linens and blankets their damned selves.

Here’s an idea of how elaborate these things got. From “Lights and Shadows of New York” by James McCabe, 1872:

The society woman must have one or two velvet dresses which cannot cost less than $500 each. She must possess thousands of dollars worth of laces, in the shape of flounces, to loop up over the skirts of dresses… Walking dresses cost from $50 to $300; ball dresses are frequently imported from Paris at a cost of from $500 to $1,000… There must be traveling dresses in black silk, in pongee, in pique, that range in price from $75 to $175… Evening robes in Swiss muslin, robes in linen for the garden and croquet, dresses for horse races and yacht races, dresses for breakfast and for dinner, dresses for receptions and parties…

Ok, this was Vanderbilt Level Trousseauing, but that shit trickles down.

Thankfully, as time went on, the idea that a girl needed to spend all of her pre-engagement time sewing and collecting things for her household got a little ridiculous. Eichler argues “It seems rather a foolish waste of time for the girl of means to sit for endless hours sewing on rows rows of lace when machine made garments may be at reasonable figures. If she chooses her things carefully they will bear the stamp of her personality almost as as if she had fashioned them herself.” The 1920s were also the dawn of the Department Store in America, and buying pre-made items was a way to show off your middle-class status. So it was out with the homemade trousseau and in with buying one at Lord & Taylor’s…a modest improvement.

Traditional trousseaus fell out of fashion around the 1950s, replaced with the modern idea of the wedding present and registry. Until then, wedding presents were expected to be small, decorative items. It wasn’t until relatively recently that the idea became for all the guests to provide the gifts that would set up the new couple in their home. However, with many more couples living together before marriage, or choosing not to marry at all, the idea of setting up a new home is becoming a little dated, isn’t it? Does this mean there is an opening for the trousseau to make a comeback?!

5 thoughts on “Thank Goodness We Don’t Have To Do That Anymore: The Trousseau”