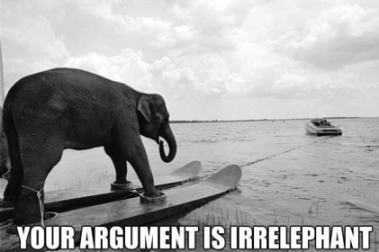 Growing up, my grandpa always said you should never discuss money, politics, or religion at the dinner table. As a young New Yorker who was used to every conversation eventually becoming a discussion of how much you paid in rent, I was pretty sure that this left nothing to be discussed but the weather and perhaps the nice color of the wood on the floor. However, there is something to be said for not bringing up wildly divisive topics in diverse company. For instance, I would have no problem discussing transsexual porn at a meal with close friends (this has happened), but you probably don’t want to bring this up with your parents’ friends (who were at the lunch table when this happened, oops).

Conversation is a tricky thing, and what may seem like an obviously neutral topic to you may soon become a heated discussion. If you find yourself here, there are a few ways to tackle it.

This works best when you’re at a large party, or anywhere with ample distractions. At my family Christmas party a few years ago, my fiance and I were speaking to one of my uncles about Obamacare. Soon, another family member came up to us and began to argue about socialism. Quickly, my fiance and I looked at each other, and politely excused ourselves to refill our wine glasses. We were never seen again. (JK we basically hung out in the living room until my uncle showed up an hour later and was like “YOU BAILED ON ME!” and we were like “Dude, we were not getting into that.”)

A nice way of doing this is to find a neutral kernel within the tricky subject and focus your comments on that. Let’s say I was stuck in a conversation with someone who didn’t share my views on legalizing marijuana, and who was becoming very vocal about that. I could perhaps transition that into talking about the episode of “True Life” I saw about smoking pot, and then mention how I’m a sucker for trash TV, and then ask if she watches “What Not To Wear.” Try not to say much, and listen for an opening into a topic that won’t get you both so riled up.

This is old advice. According to A Gentleman’s Guide to Etiquette by Cecil B. Hartley, published in 1875, “Even if convinced that your opponent is utterly wrong, yield gracefully, decline further discussion, or dexterously turn the conversation, but do not obstinately defend your own opinion until you become angry.”

But easier said than done, right? I mean, you’re never going to know what someone’s trigger subjects are. Maybe this person hates Clinton Kelly with a fiery passion and this sends the whole thing into a tailspin. One trick is to turn to things in the present. Discuss the beautiful Christmas tree, or a friend’s lovely necklace, or the host’s great selection of beer. Hell, discuss the nice color of the wood on the floor. I’ll concede that it’s better than arguing about abortion.

The thing you need to know about arguments is that there is pretty much no chance you are going to change someone’s mind. You may have all logic and evidence on your side, but parties, dinners, business meetings, etc. are not the place to convince someone that tattoos are not a sign of moral inferiority, even if you’re totally right. A quick “I’m going to have to disagree with you on that” in a light tone usually suffices, if followed by a brand new topic. If you’re pushed to explain why you disagree, you can give an example (“I know plenty of friends who have tattoos who have great careers/I have a tattoo and I’m not a monster”), but keep the focus on personal experience, not why the other person is Objectively Wrong.

Of course, some people are just looking for a fight, in which case it’s perfectly acceptable to be a bit more forward and say something like “I really don’t feel like talking about this right now.” And if they get upset, return to Step 1 and walk away, knowing full well that they’re the rude ones for pushing the issue.