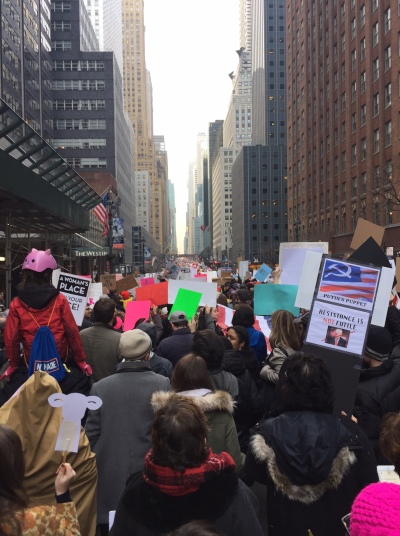 I attended the Women’s March in New York on Saturday and was thrilled that despite the enormous crowd and extremely slow movement, New Yorkers were at their absolute best. There was no pushing or rude remarks, people trying to get across the march were allowed to move through easily. I even encountered some tourists trying to get across to Grand Central with several large suitcases. When those suitcases inevitably fell over, people stopped to help them right them and get across to the train station. I had intended to write a whole post about it and then about how you don’t have to be polite to people who actively seek to harm you. But then I started reading a whole lot more about how the March made many groups feel excluded and felt that those discussions were better left to people much more informed than me.

One thing that did really strike me about my experience that also relates to etiquette, is the importance of invitations in life. We would be completely isolated in our lives if we never extended or accepted invitations. And sometimes those of us who are inclined to stay home and binge watch The Crown yet again, can be lured away by a tempting invitation. The same holds true with political action. It’s soooo easy to say to yourself, “I don’t know where to go or what to say to get involved, so I might as well just stay home.”

When all my girlfriends were going to Washington with their mothers to March and I wasn’t extended a particular invitation from them (which is fine! for the record! I love you guys!), I thought to myself that getting to DC by myself was too much trouble and that I would just sit this one out. Then I found out that the New York March was also happening, and I also said to myself “no one else I know mentioned going, so I think I will sit this one out.” But then I realized what a big thing it was going to be and decided I HAD to go. But I still didn’t want to go alone. So I reached out to a bunch of people who were going to be around and asked them to come with me. And they did! And some of them might not have if I hadn’t asked. So, I think, that beyond your own political actions, one of the most important things you can do is do that action, but also bring another person along with you. Now you’ve doubled the number of people! And then that can go on exponentially! Host a get together where everyone sits around and calls their senators. Invite some friends to go to a Town Hall with you. Get a group and go to the NEXT big march.

Jaya reminds me that the one caveat is that if someone doesn’t want to go because they feel that the march marginalizes them or makes them feel excluded, or many of the other very good reasons why they wouldn’t feel comfortable attending, then of course, don’t push them on it. And then see what you can do to make them feel more welcome at similar marches, or just in general.

I know that people are grown ups and should be able to do what’s right on their own. But seriously, people are so incredibly lazy most of the time. There are whole memes about the excitement of cancelling plans. Peer pressure really works! So please, send an invitation to the revolution and hopefully the thanks you receive will be bounteous.