As we’ve established, planning a party is hard. No, it’s not hard to say BYOB and order a few pizzas, but when it comes to any parties larger than that–dinner parties, holiday parties, weddings–there are a lot of moving pieces. There are guest lists and menus and seating arrangements and invitations and possibly staff, all weighed against the ultimate stress of any party: money. So every party, generally, is a balance of all those things. It’s an experience that makes the most people possible happy without the hosts going broke.

This means that, sometimes, there are minor disappointments, though I hesitate to call them that because no reasonable person would be disappointed. If there’s only beer and wine instead of a full liquor bar? Fine! One dessert instead of a dessert buffet? Whatever! Plastic cups instead of glass ones? What is your life that this is even registering as a problem?!

Which brings me to an incredibly unreasonable person I encountered at a recent wedding. The wedding was beautiful, and featured heavy passed appetizers and a buffet with many, many options. There were plentiful tables, couches and bar tops, though apparently the deal was that, while there were enough surfaces for everyone to eat at, some people were to be left standing. Again, just fine! You take 20 minutes to eat on a bar top and sit on a bench later and everyone has a grand time. Well, that wasn’t the case for one guest, who I overheard on line for the amazing mac & cheese. She would not stop talking about how there weren’t enough chairs. As if that weren’t bad enough, the father of the groom came over and joked about cutting the line for food (as he is the father of the groom). She said no, because they were mad at him that there weren’t enough chairs. He looked incredibly apologetic and sort of slinked away.

You can probably tell I was horrified. It’s fine to privately notice, and maybe even complain to a close friend, that you wish things were one way and they are in fact another. We do this every day. But let’s just make it clear that a situation like this is no one’s fault. Nothing was done wrong. Things were just one way and this woman didn’t like that. Recognizing that herself is one thing, but complaining to the host is entirely another. Just…just don’t do this? Okay? Good.

So you think you know about cocktails. They have alcohol and you like them.

But there is so much more to it!

Technically a cocktail is a drink with sugar, water, spirits, and bitters. Though a more modern definition is a spirit a mixer, and bitters or other flavoring. Whereas a rum and coke is a highball, or just an alcohol and a mixer. They are called highballs because they are served in a tall, highball, glass.

Other ways to take your alcohol are neat (just the spirit, in a glass), “on the rocks” (just the spirit, over ice), straight (just the spirit, chilled), or up (in a stemmed glass- a martini “straight up” would be a chilled martini in a stemmed glass). A fun way to refer to a measurement of alcohol is by fingers. If you put your finger up to the bottom of the glass and pour enough alcohol into the glass to reach the top of the finger, it’s about one ounce of alcohol, then you can ask for one finger, two fingers, etc. If you are a jokester, you can put your pointer finger and pinky finger out and call THAT two fingers, ha-ha.

There are generally two designations of spirits: top shelf and well. Top shelf is the premium expensive liquor and well is the least expensive. It took me a couple of years of going to bars in college to figure out what well meant. Usually any happy hour specials will note that they apply to well drinks. And that is generally what you will get if you ask for a whiskey and ginger or whatever. If you have a preference, you will have to specify it, or the bartender may ask.

How to stock a bar

To create most basic cocktails, your home bar should have:

When you want to move up to something a bit more sophisticated, whiskey sours and margaritas.

It’s also a great idea to have something fancy and mature in your pocket for when you might be taken out to a really nice cocktail bar. Of course, it’s great if they have a menu you can pick off of, but a Manhattan, Old Fashioned, or French 75 will impress.

Knowing what everything is and knowing what you like to drink is the cornerstone of drinking etiquette, but there are a few more tips to keep in mind:

Shark Week started last night, and it runs through Saturday. For millions of Americans, the Discovery Channel’s annual weeklong marathon of shark-themed documentaries is must-see TV. For many of America’s shark scientists, Shark Week represents something more, and the associated rituals and complicated emotions it stirs can be confusing for their non-scientist friends. We asked David Shiffman, a Ph.D. candidate at the University of Miami studying shark ecology and conservation, to explain his Shark Week traditions.

You mentioned “complicated emotions.” How do shark scientists feel about Shark Week?
Many of us have a love-hate relationship with Shark Week. It’s always exciting to see our favorite animals on TV. However, in recent years, Shark Week’s reputation for factual accuracy is, to put it charitably, mixed. Shark Week can also be exhausting for us. I’ll be watching every episode and providing live fact-checking and commentary on twitter, and I’ve done about 20 media interviews so far. So if you attend a Shark Week viewing party with shark researchers, expect lots of surprisingly loud outbursts—some of joy, and some of frustration or even anger.

Wait, a Shark Week viewing party? Is that really a thing that people do?
Yes.

REALLY?
Yes! Really! Is that really any weirder than attending a Super Bowl viewing party when your team isn’t even playing?

Are there any taboo subjects one should avoid discussing with shark researchers at a Shark Week viewing party?
Hoo boy, there sure are! These are pretty generally applicable to any interactions with marine biologists, but emotions can be particularly raw during the “Most Wonderful Week”. If you’re talking with a graduate student, don’t ask when they are graduating—if it’s soon, they’ll proactively tell you, if it’s something they don’t want to discuss because they’re frustrated by lack of progress, they won’t bring it up.  Don’t ask if they are featured in any Shark Week specials—again, if its good news, they’ll bring it up.  And you shouldn’t ever ask any scientist why they went to graduate school in the sciences instead of medical school medical school.

Oh, this is a big one: don’t ask why we chose to study sharks and not dolphins. Many shark researchers hate dolphins due largely to public misunderstanding of the differences between dolphins and sharks.  Also because people ask us if we are getting graduate degrees in marine biology to become dolphin trainers at Sea World (that job does not require a graduate degree in marine science). People think dolphins are all sweet and innocent and that sharks are scary and mean, but did you know that some male dolphins intentionally kill newborns so that those newborns’ mothers will be more willing to mate?  They also torture and kill babies of other species. Dolphins don’t really “save” swimmers from sharks, and in fact sometimes try to rape or drown swimmers. They also have lots of STDs. See, you got me started ranting about dolphins. Don’t do that.

What should I talk about with shark scientists?
Most marine biologists enjoy our work and really enjoy talking about it. Ask us what we’re studying, what our favorite part of our job is, if we have any good stories about working with sharks. Also, most of us are regular people who have lives outside of our jobs, so feel free to ask about whatever you’d talk about with anyone else you’re meeting at a party, like movies, or what your town’s local sportsball team has been up to lately.

To wash it all down, you’ll need some sharky alcohol. Our great nation is blessed with an increasing variety of beers featuring sharks on the label, including Landshark Lager, Lost Coast Brewery’s Great White Lager, and anything by Dogfish Head Brewery.  Be sure to open these beers with a shark bottle opener. There are some liquors with sharks on the label, including mako vodka. If you aren’t a purist, it’s ok to use liquor featuring any kind of marine life, like Black Seal or Kraken. My personal favorite shark-themed mixed drink recipe is the SharkNado, which is made with sparkling cider, sprite, whiskey, rum, and vodka-soaked gummy sharks.  And for your mixed drinks, be sure to use shark fin shaped ice cubes.

Soaking gummy sharks in vodka in preparation for making a pitcher of SharkNados. Photo: David Shiffman

Should I bring a gift to a Shark Week viewing party?
This isn’t strictly necessary, but host gifts are always appreciated at any house party. There are lots of shark-y gifts available.  You can even get a shark-y gift for the host’s pet! 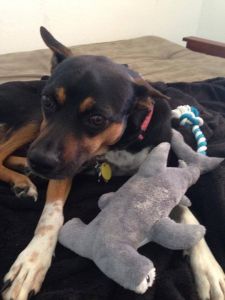 What should I wear to a Shark Week viewing party?
The dress code is usually Shark Chic. Just wear your favorite article of clothing that has sharks on it.

An example of Shark Chic dress- my fiancée, my friends and I on our way to see Jaws in theaters.

What do I do if a situation arises that isn’t covered in this guide?
Feel free to ask me about any Shark Week viewing party etiquette, or any question related to sharks, on my twitter (LINK: Twitter.com/WhySharksMatter) or Facebook Fan Page (Facebook.com/WhySharksMatter). I’m always happy to answer people’s questions.