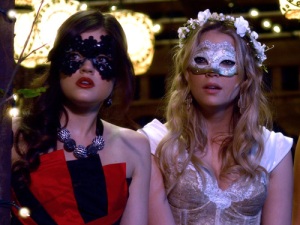 The Pretty Little Liars always have the right costumes

Your basic party is pretty easy to plan. Clean the house, put out some snacks and drinks, turn on some music, and your friends will generally make a good time of it. And sometimes parties have a natural theme, like a certain holiday. But sometimes you want to throw a party around a specific theme or activity. You may want to have your friends over for board games, or a craft night, or a costume party, or even to watch a specific TV program. This takes a little more finesse to pull off. On one hand, it’s weird if only a couple people have taken the activity seriously. On the other, it’s weird to force people to participate in something. Here are a few tips on how to throw, or attend, a successful theme party.

If You’re The Host

1. Make it really clear what the party is about. I’ve seen so many emails along the lines of “there will be food and drinks and games and music,” which reads as a list of optional things available to you should you decide to attend this party. And then you show up and apparently games are the whole point. Make your invitations specific. Say you want to host a Monopoly night, or marathon The Sopranos, or have everyone learn macrame. Tell people explicitly what they need to bring or wear if that’s important.

2. Not everyone is going to be great at the theme. Once Victoria hosted a “masquerade” party, and requested everyone dress in sexy, fancy attire and wear masks. I think we all wore masks for about five minutes before our faces got sweaty, and some people dressed fancier than others, but it was okay because 1. we’re all friends and 2. Victoria is a great hostess who would never in a million years make someone feel bad for not adhering to a theme. Also, every year we host a Halloween party, and though we will lightly jab at people who don’t show up in costume, we understand that not everyone has a costume/wants to wear one.

3. If tone/theme is important to you, you need to provide it yourself. Basically, the bigger you want the theme to be, the less you can rely on people to do it for you. Not that your friends aren’t great, but let’s say you want to throw a Mad Men party, where you all eat 1960s food and drink 1960s cocktails and dress like you’re on the show. Asking someone to pick up a six pack for a party is one thing, but asking them to research vintage cocktails and be on top of all the ingredients for them is another. I’m sure you have close people in your life who would do this for you, but part of being a host is, well, hosting. If it’s important to you that everything match this way, you’re going to either need to spend the time and money pulling that together, or delegate with the risk that it won’t be your vision.

4. Understand if people decline because they’re not into the theme, or choose not to participate. As with anything, you have to know your audience. Not all of your friends are going to have an outfit at the ready that makes them look like they’re in Mad Men.  Not everyone wants to marathon the same TV shows as you, or is into crafting, or knows what people eat at a 1970s disco party (quaaludes?). Sometimes this means your guests will try their best and fall short, sometimes it means they’ll show up because they want to hang out with you and not really participate, and sometimes it means they won’t come at all. You cannot make someone as enthusiastic as you, and that’s okay!

5. Relax, nobody will notice the details as much as you. This is a blessing and a curse, but try to see it as a blessing. Give yourself a break. Don’t spend a week worrying that the ratio of vegetarian to non-vegetarian appetizers is off, or asking your guests a hundred questions about what they’re bringing, or bemoaning that half the people showed up without the right costumes. Of course these things are frustrating, but at some point you have to let it go, mainly for your own sanity, but also because the most important thing for a host is to appear relaxed and happy. If you’re stressed, your guests will pick up on that vibe, and no one will have much of a good time.

If You’re The Guest

1. Make an honest attempt to engage in the theme!  Themes are no fun if nobody participates, so if it’s clear there’s a certain activity the party is centered around, go for it! Wear a costume, bring themed favors, suggest what board games you’d be excited to play. Don’t try to make it just a normal party if that’s not the host’s intention. And if you don’t know what you should be doing, be honest. A few weeks ago I went to a potluck, and one person admitted she wasn’t a great cook and offered to supply cocktails. It was great, because she clearly wanted to be at a party with all her friends, even if making an elaborate fish entree wasn’t her thing.

2. If you really can’t do that, don’t go. Do not go to a Game of Thrones party if you hate Game of Thrones, no matter how many of your friends are there. You will not like it. You will either be forced into conversation after conversation about Game of Thrones before watching the show, or you’ll be that person trying to change the subject and steer everyone away from it and it’s just not a good look. If you can’t make a good faith effort to engage in the central activity, just don’t go!

3. If you’re the type of person to notice negative details, keep it to your-fucking-self. The last thing a host needs is being told their 1960s decor isn’t really authentic. Keep your mouth shut.

2 thoughts on “So You Want To Have A Theme Party…”