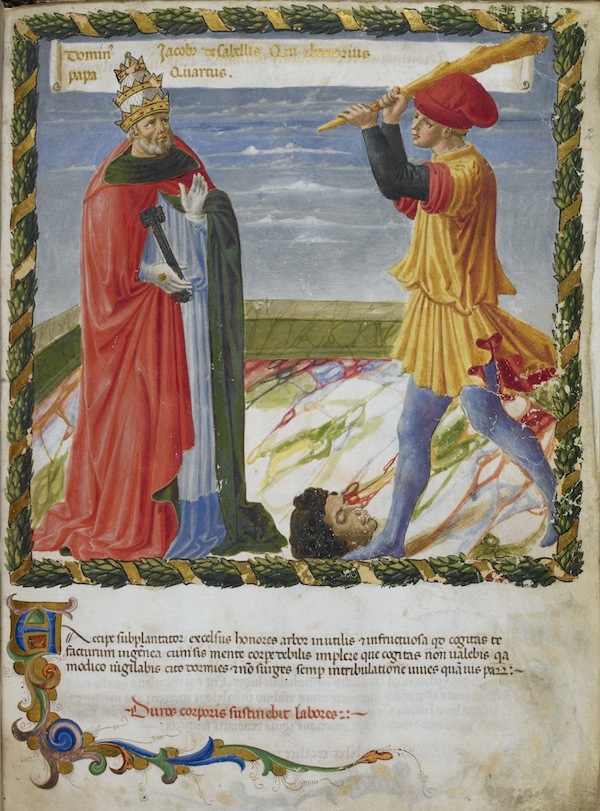 If all else fails, hit them with a stick.

I was friends with a person for a while, and during that time the person did not respect boundaries I tried to set clearly and added a lot of unnecessary drama to my life. At one point the person and I had an argument resulting in the person calling me a very offensive insult, and I told the person that the relationship was over and the insult was unforgivable to me. I thought this was a clear “break up.” Unfortunately the person did not interpret it as such and continues to invite me to events, seek me out at my workplace, ask other friends about me, etc.
What is the best way to explain I prefer no continued contact with this person without explicitly telling him that he’s a toxic drain on me?
Thank you so much!
Sincerely,
So Over This
Official Etiquette:
Miss Manners is actually a huge fan of the fade out, which she calls “being increasingly too busy to socialize.” But she says when the person is bothering you to the point of practically stalking, she says you have to tell the person that you are no longer interested in seeing them.
Our Take:

Jaya: This question has such perfect timing, I had just starting writing a post specifically about the friendship fade-out and I think a lot of my points will work here too.

Jaya: I have this working theory that social media totally makes it harder to gracefully  fade out of a friendship. I know you’ve made this point before, that fade outs for friends was really accepted and normal, because sometimes you just stopped being friends and it’s fine. Good lord if I had kept in touch with everyone at summer camp I thought was gonna be my BFFL there’s no way I’d even have time for a job. But now in order to stop being friends, it really takes effort. You do need to cut them out of your life in a more active way. (Also I think we could all take to heart the idea that not every friend is a forever friend, and that’s okay.)

Victoria: Yeah. I think Facebook, etc does make it feel like you are still friends because you see pretty big pieces of their life. And like, actually, I don’t think its that bad to keep up a FB connection with someone who you don’t really want to be active friends with. But obviously when you cross a line…then you have to be more proactive.

Jaya: Right. There is a difference between a Facebook friend and an IRL friend, for lack of better terms, and it’s easy to mistake the former for the latter. Social media is great for those friends you do live far away from. There are people I really liked that I probably would have faded out with if weren’t for Facebook, and I’m grateful for that. But right, then every person who sees your photos and reads the articles you post think they’re having a great personal interaction with you. That’s slightly besides the point here, where it sounds like this person is bordering on stalking.

Jaya: Like “seeks me out at my work place” raises HUGE red flags.

Victoria: I think in this case LW needs to say, “I am still angry and offended about our fight and you need to leave me alone.” The fight situation gives LW a good excuse that’s not making it about how toxic the person is.

Jaya: Absolutely. Sometimes people don’t get it after the first round, but keep the same message. And maybe tell your friends to do it too. Just like “I told you this relationships is over, so please stop contacting me”

Jaya: There may be a more polite way to say that but fuck it, we’re past that now.

Jaya: It’s interesting to me how so much of our vocabulary about friendships is the same as romantic relationships, yet there’s this reluctance to treat them the same way. Like, in this letter, this guy does something offensive and unforgivable, and she says they can’t see each other anymore. That situation has gone down a million times in romantic relationships, and in those situations this guy would be considered a creepy ex. But here he’s just a person still trying to be friends.

Victoria: Yeah, I wonder if it’s because you CAN be kind of a casual friend but you can’t really be in a casual relationship? I mean, other than a FWB thing.

Jaya: Totally. Like, if someone said “even if we don’t talk for months, we can pick up right where we left off” about a spouse, that’d be a bad thing. So here, there was a firm “break up,” even if this person is not getting the message. And I think the letter writer just needs to repeat it until the ex-friend gets it, unfortunately. Not in detail, not “because you’re a toxic drain on my life,” but reminding him of what LW already said and standing by it. And then just blocking all email/Facebook/other contact points/

Victoria: Yep! Yeah, I think saying that he’s a toxic drain would make him defensive

Victoria: No contact is just much easier and like, at a point, it goes beyond etiquette into safety. And safety always trumps etiquette.

Jaya: Absolutely. If he’s legitimately contacting you at work, talk to HR. Or the police. Or if you work at a “public” place like a bar, restaurant, retail, etc. makes this much more difficult. But ideally you can talk to your boss and something can be set up. Like, there’s a photo of him and everyone can recognize who it is and back you up if he comes in.

Victoria: That’s a great idea, but I mean, hopefully it doesn’t get to that point.

Jaya: I do think we can segue into the idea of the FRIENDSHIP FADEOUT that I’m clearly dying to talk about, because in most friendships, there is not a singular fight that marks an end point. Either there’s a pattern of behavior that turns you off, or you just realize you’ve grown apart and don’t feel like putting the effort in anymore.

Victoria: Yeah for sure. (I hope your wanting to talk about this so badly is not a hint =P)

Jaya: Hahaha omg are you kidding me??? Also I talk to you every day. So I’m doing a bad job if that’s my plan.

Victoria: Hahahahaha, good point.. Okay anyway, what would you like to say about fade outs?

Jaya: Basically, I’m a fan of the fade out, because I think it’s something that always occurred very naturally and it only seems unnatural now with Facebook and such. Like, people grow apart! This is not an offensive concept and friendships ebb and flow, certainly, but it seems to me the signs of a fade out are pretty clear. Someone minimally or flat out, not at all engaging in any contact with you, never initiating anything or wanting to hang out when you initiate, etc. And I guess if you can’t pick up those hints there are bigger problems. I’m sure people can be like “wahh we should all be straightforward” but I don’t know, lots of human interaction is based on hints and suggestions.

Victoria: Yeah! And it’s usually not like you hate the person.

Jaya: I actually think Kate Harding put it well in this article about affirmative consent. Like, constantly taking stock of someone else’s reactions to what you’re doing is part of sex/a relationship. And not just “yes” and “no.” You can tell when someone is into something and when they’re not, usually.

And right! It’s not about hating someone, you just stop being great friends. I don’t really see this as devastating. Like, it might hurt to see someone pulling away, but usually you can find that it’s mutual? I think the situation where one person is 100% on board and the other is 100% not is pretty rare.

Victoria: Yeah, I can’t even remember in my own life….I think it so often happens during a life change…or especially distance that you almost don’t even notice.

Jaya: Right. Every once in a while there might be a pang, like “oh I had a fun time with that person, I wonder where they went” but I’m not losing sleep over it.