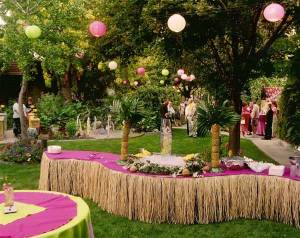 Dispatches from wedding world have been getting a little crazy. People are getting their weddings corporately sponsored. They’re asking guests to pay for their dinners, or putting bank transfer details on invitations. They’re yelling at guests for not giving them enough money. It’s nonsense, but it’s an unfortunate symptom of an industry that tends to conflate “fancy” with “polite.”

We are taught that providing the MOST at a party is the nicest thing you can do, so couples want to provide the MOST at their weddings, and when they realize that it gets expensive quickly, they decide that they should pass the costs onto guests…completely forgetting that whole “hosting” thing.

Recently, The Daily Mail outlined some ways couples are trying to scrimp and save on their weddings (though it doesn’t really cite anything). We discussed a few of them.

Asking Guests To Cover Their Meal

Jaya: “Bank details are often printed at the bottom of the invitation so you can pay for the meal in advance.” faints

Victoria: Okay! This is a Europe vs America thing- Europeans don’t use checks ever at all, they do everything through direct transfers. So basically its the same as expecting someone to send a check. Still tacky, obvs, but it’s the request for money, not the bank details.

Jaya: Still, the idea of putting any request besides for RSVP on an invitation! The only time I can think of it being okay to ask for wedding guests to pay for their own dinner is if you get a courthouse marriage and just ask everyone to join you at a restaurant after, where it is 100% clear you are not actually hosting, you’re just asking people to meet you for dinner.

Victoria: Do not ask anyone to pay for any part of a party you are hosting is my firm line. I mean, you can ask your parents but not guests.

Victoria: I think the argument there is that it’s disingenuous to act like you want all that stuff and never ever have any intention of actually keeping it.

Jaya: Yes. You don’t have to make a registry, or put a million things on it. If you just want cash, don’t make a registry and you’ll probably get cash.

Victoria: And then you can cash in all those toasters you do get with a free conscience.

Jaya: Exactly. Once you give a gift, it’s not up to you to judge how the person uses it (or returns it).

Jaya: I see no problem with this.

Victoria: Yeah, I don’t reaaaaallly care about email invitations. I care a little, but not much.

Jaya:  The only time I can see it being an issue is if most people don’t use email, because then it’s not even functional. But if you’re not a sentimental person, and just want to get the information out, this is just fine. Go for it.

Victoria: Right, but that’s a different thing. it’s something I would raise my eyebrows at stylistically (similar to heavily themed weddings), but everyone has the right to do it as long as they aren’t also being rude. It’s more a matter of personal taste than etiquette.

“One of the newest tricks is covertly providing champagne for the wedding party – the bride and groom, bridesmaids and best man – but no one else.”

Jaya: Or just don’t serve champagne! I know the champagne toast is seen as this classic thing, but you can do it with wine.

Victoria: This is just SMART.

Jaya: Yes! So many wedding websites have little marketplaces for your excess candles and chair covers and whatnot, because you will probably never use them again.

Victoria: And it depends on their tolerance for it. I think it’s a very “know your audience” sort of thing, though there are some things I think are never really okay- like making them clean up the whole reception afterwards, except in possibly very special circumstances.

Jaya: Yes. I think my personal line is making guests do any sort of work during the actual wedding or immediately after. Setup, sure. Asking friends to help with crafts in the months leading up, totally. But once you’re in party mode I think it’s really rude to ask people to remove themselves so they can break down tables. Also, you shouldn’t plan the wedding under the assumption that you’ll get this help. Like, be ready to make every one of those streamers yourselves if none of your friends want to spend a night crafting with you.

Uninvitations: “Brides who want to let would-be guests down gently send out Non-Invitations, which are meant to be a polite way of letting people know they haven’t made the cut.”

Victoria: It’s so unnecessary and potentially hurtful! People will know they are not invited if they do not receive an invitation!

Jaya: Yes! Also you do not owe anyone an explanation for this sort of stuff! Oh my god this is just too much.

And there you have it! Next up, we’ll be discussing some more ways you can save money while still having a beautiful and polite wedding.

One thought on “How To Throw A Polite Wedding On The Cheap, Pt. 1”