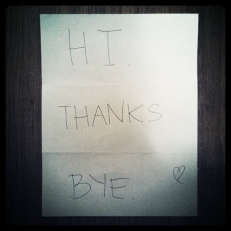 It recently came to our attention that there are a myriad of services out there that will take care of all the pesky parts of thank you writing (for save the dates, invitations and the like as well.) Basically, the service emails all your guests and asks for their addresses, compiles them into a database. You then input the invitation information or your thank you note contents (presumably these are individualized) and it prints it out, puts it in an envelope, stamps it, and mails it. So you are still writing the content, but then you don’t have to deal with any of the hassle. We had a nice talk about whether this was rude or not, but share your opinion in the poll at the bottom!

Victoria: Soooo what do we think about this service that writes your thank you notes for you? (I mean you write the content, but skip the actual writing and licking and stamping and such.) I actually sent a card to my mom this way once- she was weirdly offended. And it was just a random no occassion card!!
Jaya: Oooh, yeah I think it’s weird. Like, at that point, send an email or type out a letter.
Victoria: Yeah exactly, I think it makes you look lazy to the point of not caring. Seems great for invitations though.
Jaya: You used it though?
Victoria: It was a similar thing and I had a coupon code for it- Hallmark has a thing where you can send cards directly from their website, so I tried it out and my mom did not love it. Which is CRAZY because she is the queen of e-cards.
Jaya: It is really strange, because you realize the line is so murky. Like, handwritten from you is ok, e-cards are ok, but a handwritten card done through the internet is not.
Victoria: Yeah, I mean, I guess it does end up looking like a tricky junk mail spam thing.
Jaya: Yeah, all those “handwritten” fonts don’t look natural anyway. It’s interesting though, that there’s a market for it. That people value the idea of getting a handwritten note so much they’re willing to automate the process, but not to the point of getting an email.
Victoria: Haha yeah, but I think it ends up backfiring because it looks so weird. I think its almost better to just send an email, it’s more natural.
Jaya: Definitely. I really am all for email thank yous. Especially since I’ve gotten a few thank you notes returned and people aren’t getting back to me about their actual addresses
Victoria: Ahhh yeah. I dunno, I still really like handwritten notes, but then, I never got yours because it was lost in the mail. So maybe it would have been better to just have it in an email. Then again, things can get lost in email junk folders too.
Jaya: If the point is conveying earnest thanks, I don’t see how ink does that better. I’ll still do it, because I know people appreciate it. It just seems like ok, you can do it if the ink comes from you, not if you say the exact same thing to Hallmark and they write it down for you. At that point, is any thank you note that’s been dictated to a secretary or something less meaningful?
Victoria: Yeah! I think the show of effort counts a bit- it takes you know, 5 minutes to actually write the thing, but you double your time by having to lick the envelope, stamp it, write the address and stick it in the mail. And time=love, I guess.  Like how homemade cookies somehow seem more caring than storebought?
Jaya: Yeah! Even though if you’re a shitty baker it probably isn’t great. And what takes more time, carving cookies off a Tollhouse roll, or driving to a good bakery and picking them out?
Victoria: That’s a great point. So basically do what feels right, but know that a lot of people will still expect the traditional handwritten note.

2 thoughts on “Are Thank You Note Services Rude?”