I hesitate to write this, because I am wary of coming firmly on the side of No More Letters. What a shame, right? For a long time in my life I very much romanticized writing letters. I had a wax seal with my initials on it, for gods sake, and for one year in high school decided I’d write all my best friends heartfelt letters for their birthdays instead of getting themselves gifts (I’m so sorry, friends). Even recently I’ve found it comforting to write letters to faraway friends instead of texting or emailing, and I covet my personalized stationery.

However, the last time I picked up a pen and tried to write an extended thought on a piece of paper I think my hand cramped up. I have the handwriting of a 7-year-old on a hay ride, and between trying to make sure anything I write down is actually legible, or being like “Yes Word paperclip I am trying to write a letter, YOU’RE SUCH A GENIUS,” or making sure that after all is said and done the damn paper actually gets to where it’s going (quite a few of our wedding invitations mysteriously never made it to their destinations), the art of letter writing is losing its allure, and I think I might be done. I don’t want to give a definitive answer, but some days I really appreciate Gmail.

But, obviously, writing letters has been a huge part of how people communicated. The Polite Letter Writer, 1860, states, “Had letters been known at the beginning of the world, epistolary writing would have been as old as love and friendship, for as soon as they began to flourish, the verbal messenger was dropped, the language of the heart was committed to characters that faithfully preserved it, secrecy was maintained, and social intercourse rendered more free and pleasant.” Nice, right?

The Polite Letter Writer has a whole guide for many types of letters, but there are some basic rules. First, make sure you spell everything correctly, a rule that gives me heart palpitations because I rely heavily on those squiggly red lines to let me know what I do wrong. Also, “vulgarism in language” suggests you’d be bad company, and “Proverbial expressions and trite sayings are the flowers of the rhetoric of a low-bred man.” So, you know, say what you mean. She then goes on for about ten pages about how to craft your natural writing style, which I’m sure is a lovely skill to have, but it’s all about studying the works of eminent poets but not actually imitating them, and I’d rather just send a Futurama .gif. (Hahah some Baby Boomer just read that and had a heart attack. Sorry guys, sorry for keeping it real.)

Most of the letter writing guides I’ve found follow the same format, and it’s EXHAUSTING. I mean, just look at the Table of Contents for Martine’s Perfect Letter Writer: 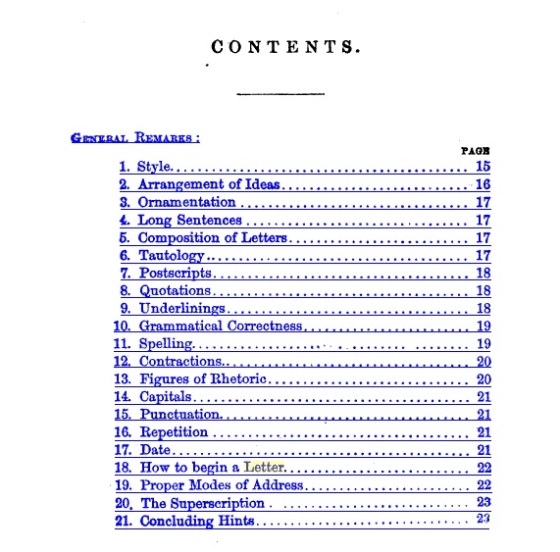 You don’t even get to ‘How to begin a Letter” until 20 pages in, and that tip is literally start writing two-inches down from the top of the paper. It’s madness. Here are some other outdated tips for writing all day long.

Of course, there’s no need to throw out the baby with the bathwater (was that too much the rhetoric of a low-bred man?). These books still have good advice, and I’d like to leave you with something that applies whether you’re communicating via written letter or Gchat:

And finally remember that whatever you write is written evidence either of your good sense or your folly, your industry or carelessness, your self control or impatience. What you have once put into the letter box may cost you lasting regret, or be equally important to your whole future welfare. And, for such grave reasons, think before you write and think while you are writing.

4 thoughts on “Thank Goodness We Don’t Have To Write Letters Anymore, Right Millenials?”