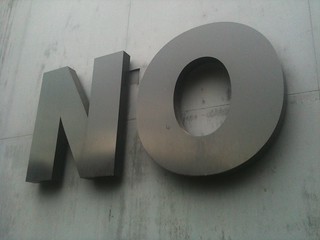 There has been a bit of a backlash against the insanity of weddings lately, with a couple of blog posts coming out about people finding it too expensive and time consuming to be part of the bridal party or even just a regular guest.

Jezebel has discovered that Americans spend almost $600 PER wedding. They justifiably find that nuts, but seem to be placing the blame on the couple getting married.

A Practical Wedding published an advice column where a woman was asking how to get out of being a bridesmaid ever. Without having actually been asked or discussed what the costs might be with the bride.

What people need to understand, is that you absolutely can turn down invitations to weddings and even requests to be a bridesmaid or groomsman.

We had a great conversation about why people are feeling the pinch and why you shouldn’t feel guilty about saying no.

Jaya: I actually saw some comments that I thought related to it on APW. A long time ago APW had this piece about how “your wedding is not an imposition,” and guests can be big kids and decide whether or not they can come, and some people in the comments were like “some weddings are impositions!”

Victoria: HahahaI mean, I guess I can see how a very few family weddings might put you in a tight spot. Like say your sister decides to get married in Timbuktu and you are expected to be there, and pay, and pay for all the expensive bridesmaid stuff, but for the vast majority of weddings, you can say NO.

Jaya: Definitely. I feel like there are tiers. There are friends/family where I’d do anything they want, and there are friends where if it’s anything more than a weekend a short drive/cheap flight away, I won’t. Is that awful of me? Omg no one should separate out friends like that.

Victoria: I mean, you have to! Our time, vacation, and money are finite resources. Sometimes you might be able to fly across the country for your childhood best friend who you haven’t seen in 5 years, and sometimes you can’t. And I think people understand that. I mean, are you having situations in your own wedding where people can’t come for various reasons?

Jaya: Definitely, and it’s all understandable! One friend is taking her exams at medical school in Israel, another has a 6-month old baby and has a hard time traveling.

Victoria: Right, and that’s all totally understandable and you are okay with it.

Jaya: Absolutely. Of course I want my friends there. If I didn’t I wouldn’t have invited them, but everyone has their own shit in their lives. Like please, become a doctor! That is really important!

Victoria: Right, that’s why I was so surprised reading that RSVP thread on APW where people were actually offended that people they invited couldn’t come, and were saying it was a reflection on their future relationship. I think that is not a good attitude to have,for me it treads into bridezilla territory.

Jaya: Even if a friend just said they couldn’t afford it, or some other smaller reason, that’s fine.

Victoria: Right! It was funny to me too, when people say they were hurt when their declining guests gave no reason that they couldn’t come, when proper etiquette says that you should never give a reason. I mean, it’s fine to send a note saying they wish they could come but can’t because ____ but it is also fine to just send regrets and a card and/or gift.

Jaya: People just feel the need to justify everything these days. Okay, so, with Jezebel, the thing that struck me is wording like “request to spend a luxurious weekend getaway’s worth of time and money on someone else’s event.” That “someone else” is, presumably, someone you know and like! Do you think of going to birthday parties as “now I gotta go to dinner for someone else’s event”? No, it’s a fucking party for a friend!

Victoria: And I think for the most part, it’s not that they are having a particularly extravagant wedding, it’s that there’s a really good chance everyone’s friends are spread out across the country and so you do have to fly to get there, and stay in a hotel, and rent a car.

Jaya: Exactly. There’s a difference between a week-long destination wedding on a remote island, and just asking you to fly to Boston for a weekend because that’s where they live.

Victoria: Yep, and thems the breaks. So you do have to make a call on your own of what you can afford to do.

Jaya: Like, you wanna go back to when everyone had one friend because you never left your town? Cool.

Victoria: If you know you are tight on funds and are pretty sure your besssst friend will be getting married in the next year, maybe don’t go to the wedding of an acquaintance that will cost you $500. And all these people who are saying they have to buy a new dress for each event, and shoes, and spend $100 on a gift, STOP. You do not need to do any of those things.

Jaya: You don’t! Hell even you were talking about buying new dresses and ahhh you are so pretty already don’t do anything else!

Victoria: Hahahah! I am actually not buying a new dress because I couldn’t find one I liked. But anyway, I would like to see a new trend where couples and their guests do consider the travel expense to the wedding to BE the gift.

Jaya: Yesss. If any of our guests taking any more than a subway to get to us don’t feel like getting us a present, I’m totally fine. Hell even subway people don’t have to get us gifts, it’s not for gifts. Except for you, Victoria. Will your gift be covering your plate?

Victoria: Hahaha, I don’t know, because I don’t know how much my plate costs because it seems very rude to me to be adding up what people spend on things.

Jaya: I’ll leave you a receipt on your plate.

Victoria: That would be very helpful, thanks

Jaya: And some people say “I just feel uncomfortable saying no” and that is not the married couple’s fault.

Victoria: Hahah, yeah! Saying no is fun! Learn to love it! Oh and a good point, don’t forget that you DO need to RSVP either way..

Jaya: Absolutely. I think some of this frustration comes from wedding-related events, which we’ve talked about before. As a bride, I had to make it pretty clear, over and over, that I did not want any extra parties. And there are all sorts of factors. Sometimes brides want them. Sometimes bridesmaids feel like they have to throw them, and brides feel like they have to have them, and no one says what they really want.

Victoria: And I will say, as someone close to you, I did keep checking just to make sure you hadn’t changed your mind and weren’t being falsely modest (which is pretty dumb because that is not you) but there is such a cultural expectation.

Jaya: There is! Even if the person getting married has given no indication that they would ever want something like that, people tend to think getting married magically transforms you.Because in some cases it does transform an otherwise normal person into a crazy person. But mostly I think everyone just feels like there’s this really strange thing they have to live up to. Sometimes I think this is just a case of people not understanding how reality works, as vague as that sounds. Like, if you are getting married away from where a majority of your friends/family live, then you run the risk of more people not being able to make it. Just a fact of life, no one’s fault.

Victoria: Yeah, not to mention the whole growing up in one place, going to college thousands of miles from there, and then living as an adult in yet a third place that is again thousands of miles from both of those places (this is my life) then you are going to be stuck with a LOT of people having to travel or not make it (pre-emptive apologies to everyone, if I ever do get married.)

Jaya: Yes! Also, lots of people have destination weddings for the specific reasons that they can send lots of invites but not have many people come. Not a great loophole, but if I got married in Hawaii I would not expect 130 people to be there. I just got Jen Doll’s book about going to tons of weddings, I’m curious to see what she says about it.

Victoria: Yeah, it sounds interesting. With that many weddings attended, I do wonder if she has ever said no?