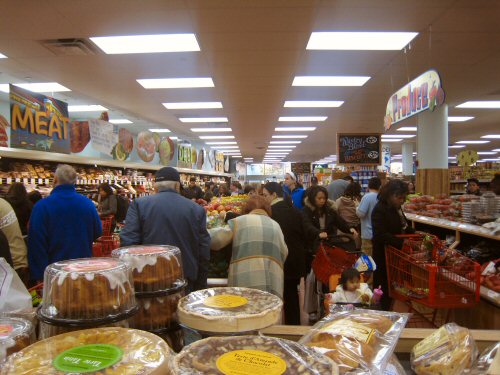 Is the low priced, delicious food really worth the Trader Joe’s lines? (The answer is yes.) [ViaFlickr user scardeykat]

While shopping at Trader Joe’s the other day, I observed a group of customers who were standing at the cash register and letting the cashier bag all the groceries in the customer’s reusable bags when they could have easily been helping. It took so much longer this way and there was a long line (this being a Trader Joe’s in New York City). What is the correct etiquette here? Are cashiers expected to bag all groceries or should the customer help out?

Tired of Waiting in Line

There is no real official etiquette here as the abundance of reusable bags and the lack of designated baggers at grocery stores are both fairly recent occurrences. So I went straight to the source and called Trader Joe’s customer relations. They say that the cashier should absolutely bag the groceries in reusable bags the same they would bag them in their own paper bags. They do mention that, of course, many customers prefer to do their own bagging and that is fine too. I’ve also spoken to Target’s customer service on this question, and they also say that a cashier shouldn’t refuse to put the customer’s items in their own reusable bag.

Jaya: Interesting research, Victoria! I have noticed a decline in the number of specific bag people. Which I think makes this harder, because either way the line gets held up longer than people are used to.

Victoria:  Oh for sure, I haven’t seen a “bagger” in ages. Although, maybe its more of a suburban thing? The nice Safeways near my parents old house always had them and when I was in Savannah for Christmas, the big grocery store (a Kroger, maybe?) that we went to had them. I’ve never seen them in the city, but i have seen them recently outside the city. Maybe its the higher rents here.

Jaya:  I mean, I grew up with them at Gristedes in New York City. And I live near two pretty large grocery stores. I think it’s more of an economy thing. Why hire two people when just the cashier can do it?  I only noticed them not in the city in the past five years or so. However, what I did notice in research, is a lot of people getting frustrated at cashiers not bagging their groceries with the bags they brought, or then getting frustrated when it took too long. You can’t have both! Or! People getting frustrated when it isn’t done to their liking, which happens no matter what bags you use.

Victoria:  Yeah. I mean, I guess I think the most polite way to do it is get started on the bagging while the cashier is still scanning and then let them finish while you are swiping your credit card and everything.

Jaya:  That makes sense, and also I saw lots of cashiers writing on forums that people should put their bags in front of their groceries, so everything is open and ready.

Victoria:  Yeah! I always put the bags on the conveyer belt first and then try to put something heavy in them to make them stand up. Although, usually they still fall down.

Jaya:  Yeah, here’s the thing with this though. Yes, it’s policy and ideally this person is getting paid to bag your groceries and do this. But if the line is long and it’s something you have the ability to help out with, you probably should.

Victoria:  Totally! And maybe grocery stores should put in a little thingy that makes the reusable bags stand up properly.

Jaya:  Haha though it depends on the bags. I usually just bring old tote bags.

Victoria:  I mean, yeah for sure. But if they sell their own bags, they should have one that fits those bags, you know?

Jaya: I can’t stand people who could easily help with bagging, but let the cashier do it alone, and then complain about things taking a long time.

Victoria:  Hahah yeah! Although, our good friend who works at a grocery store chimed in and said he’s pretty fast at doing it, so he almost prefers to just get it done.

Victoria:  I see your sarcasm there. Also a thing: some corporate chains actually have timers in the cashiers machine that times how long a transaction takes! And like, they get in trouble if they take too long. Which is sad and terrible, but also makes me feel like I have to hurry hurry hurry to bag up my stuff and get out of their way.

Victoria:  Oh! And then when we lived in Rome- its actually 100% the status quo that the customer bags the groceries and each checkout lane has two channels so the cashier funnels your stuff down one channel and you bag it up while they are funneling the next person’s stuff down the other channel. And then you get yelled at in Italian for not having exact change, so maybe that’s not the nicest system either.

Jaya:  In general I think flexibility is nice. If grocery stores are not going to hire people to bag groceries, it makes it a bit more complicated for everyone involved. Like, I can see it both ways. I can see that maybe a cashier wants to do the bagging and get it over with. Or I can see that if you have a 10 person long line you maybe hope the customer can bag their own stuff so you can get through it.

Victoria:  So basically, try to help out if you can and move things along, and if you are waiting in line, maybe be patient that someone isn’t doing their own bagging because maybe they can’t for some reason.

Jaya:  Or maybe they’re used to shopping at places where it’s done for them, because apparently everywhere has a different policy/different idea of whose job it is.

Victoria:  Yeah, I think that’s a source of a lot of the confusion. And even at the same store, some cashiers will do it and some won’t

Jaya:  Definitely, so I know sometimes I’ve been standing there like an idiot not bagging things, not because I wouldn’t, just because I was used to having it done at that specific grocery store. Also, in general, long lines at grocery stores suck but it is a known quantity. I find this super interesting. I think we’re at this very fascinating point in grocery store history where people are used to baggers but stores have stopped hiring them. “Fascinating point in grocery store history” like that’s a thing (ed: it is a thing!!).

Victoria:  Haha, and we didn’t even TALK about self checkouts. Let’s save it and shopping carts for another day!

5 thoughts on “Where Did The Grocery Store Baggers Go, And What Do We Do Now?”