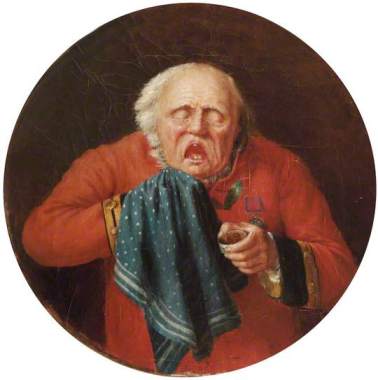 A Pinch of Snuff by Thomas George Webster

Aside from alcohol, I have never really been one for drugs. And in terms of the way to take drugs, I think snorting anything sounds like the most unpleasant way. Ok, maybe I wouldn’t stick a needle in my arm either, but can anyone tell me they actually enjoy the sensation of a dry, powdery substance going up their nose? This is why I always found snuff so fascinating. We have cigarettes and cigars and dip and patches, so why would you decide that shoving it up your nose is a good idea?!

According to this WHO report, “American Indians were probably the first people to smoke, chew and snuff tobacco, as early as the 1400s (Christen et al., 1982). The Indians inhaled powdered tobacco through a hollow Y-shaped piece of cane or pipe by placing the forked ends into each nostril and the other end near the powdered tobacco. This instrument was called a ‘tobago’ or ‘tobaca’. The word was later changed by the Spaniards to ‘tobacco’.” It also notes, “When smoking was forbidden on British naval vessels because of the fire hazard,sailors turned to chewing tobacco and snuff.”

By the 18th century, it was really popular, and because many Europeans seemed to have nothing better to do with their time, a complex set of social rules was set up around the practice! Women, of course, were to abstain from snuff, and men were not supposed to take snuff in the presence of women. When they did, you were to pinch some in your fingers, bring it to your nose, and inhale quickly. There is debate as to whether it is alright to sneeze afterward. In some places it was popular because of the risque idea that the feeling of a sneeze was akin to that of an orgasm. Other books say it’s incredibly rude. If you were at a party, you were also to use the host’s snuff box, not your own snuff from your waistcoat pockets. The Laws of Etiquette from 1836 also says “as to taking snuff from a paper, it is vile.”

American habits mirrored those of Europe for a while. However, many in the South believed the French and English snuff habits were too precious, and instead began to favor chewing tobacco. But it wasn’t just Westerners using snuff. The Uncivilized Races of Men in All Countries of the World of 1876 describes the snuff practices of South African natives, with the added benefit of doing it in an incredibly racist way! The author writes, “It is considered bad manners to offer snuff to another, because to offer a gift implies superiority; the principal man in each assembly being always called upon to snuff to the others. There is an etiquette even in asking for snuff. If one Kaffir [racial slur for a black person in South Africa, FYI do not use this word] sees another taking snuff he does not ask for it, but puts a sidelong question saying “What are you eating?”

The same thing happened in China, where snuff was presumably brought by Jesuit missionaries. Though initially it was all imported, China began producing snuff in an array of colors and scents. Many of the upper class still prefered imported product. It was so popular they even wrote a song about it, called “Snuff Bottle Song”:

And this wonder drug is also not the yabulu

But a special kind of foreign tobacco

Not produced in China but imported from abroad

It is its virtue to clear out one’s blood

To liven up the nostrils, and invigorate one’s spirit

Despite its popularity, in many circles it was still seen as a bad habit. In Charles William Day’s Hints on Etiquette and the Usages of Society: With a Glance at Bad Habits, published in 1844, he writes:

As snuff taking is merely an idle dirty habit practised by stupid people in the unavailing endeavor to clear their stolid intellect, and is not a custom particularly offensive to their neighbors, it may be left to each individual taste as to whether it be continued or not. An “Elegant” cannot take much snuff without decidedly losing “caste.”

Snuff is not as ubiquitous in America anymore, though you can still find it in most European tobacco shops. It’s also responsible for the name of the “anatomical snuff box,” the little dip in your hand right under your thumb when you hold it taught. However, some suggest there may be a comeback, what with all the public smoking bans happening around the world. Many are right to point out the absence of secondhand smoke when tobacco is taken this way, and the lower risk of lung cancer for the taker, which I guess is better, but I also really hope I don’t have to start putting up with a bunch of people making gross snorting noises around me when I’m out at a bar.

Anyway, if you’re interested in snuff, there’s a competition in Germany where you’re supposed to shovel five grams of it into your nose in a minute. The photos are incredible.